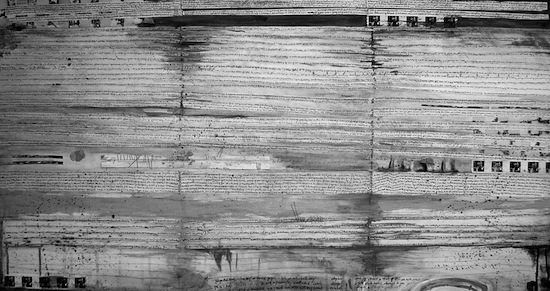 Poet Marianne Morris was raised in London. She studied English Literature at Cambridge, and was the recipient of the Harper-Wood Studentship for Creative Writing from St. John’s College in 2008. She is now researching for a PhD in contemporary poetry at Dartington (University College Falmouth). She founded Bad Press in 2002. Publications include: Tutu Muse (Fly By Night Press, 2008); A New Book From Barque Press, Which They Will Probably Not Print (Barque Press, 2006); with Bad Press: Cocteau Turquoise Turning, Fetish Poems (2004); Gathered Tongue, Memento Mori (2003); Poems in Order (2002). All Mod Cons and Iran Documents are forthcoming from Acts of Language and Openned Press respectively.

YOU PUT THE FIANCÉ IN FINANCIER

Come on don’t leave me just yet, if I haven’t figured it out. Come back for one more
kiss that will turn into fruit trees. Not to wish for the metaphor overmuch. But at
night when the tunnels are coaxing with curled fingers slogans in colours and wishing
and I’ve looked up at the sky only to find it filled with Canary Wharf, the red dashes
of light comforting as the night closes in, and would like to bed down in there under
the desk with you, in our blanket of wasted 30gsm, and steal ruined, pasty kisses like
sleep returning after too long away but the goal is not sleep or nature or money it’s
just making sure we never get there, then? We get paid, probably, I don’t know I guess
like I said it’s not about the goal. And down the street you weave amongst the trees
with blossoms, inviting the rain to flood your front room. The leaves trying to get in
the front door, with the balance sheets thinly resting amongst the shoe trees, I guess
there are things we are asked to carry in our hearts and the asking is so gently put that
we do or that there is something inherently sexual about forward interest rate curves.
It’s your life, as you like it. It is me too that wants the key, sucker for mythology and
advertising and those workdrinksjewelleryfuckers who think everything is fabulous.

Everyday they barbeque. I go to their buffet if only to remain amazed
at the future I can no longer envisage, blonde angels’ faces turned up at the
mother, shrill voices alarms of projection, evidence of what further need they
will become. Procreation is a last resort, with love now internalized as violence
done to the self, no farming tools to signify a goodness in our plight.
Our ethical canvas is not exactly blank, but palimpsest so scrawled into illegibility.

We are born in innocence, the nexus of our excuse. In this way the race
re-appropriates inculpability as dominance, handing down cash and ideas in
equal measure, both hands’ treasure bearing equal weight. Meanwhile the
great black night is illuminated by lithium which calls everything into ease.

We may no longer permit ourselves the luxury of conciseness. The various
demands of travel prevent the accumulation of dictionaries, all that which is
plugged in derives too great a pleasure from ease. It goes in shifts now all
closer together than before, input and output. Inbox (1): do you read Foucault
in the bath? Don’t worry I haven’t read him either. Stand eating at the sink.

Elsewhere the countryside brushes death against the lips of a photographer
for there is no space now unencumbered with our anthropologies, debased
or steeped in theory, terrain is nonspecific exempting what we can work
the land for, love or drinks. It is much easier to roam through the brackets
of the past, reaping the intangible things and the neverending merits of death
exacted by our increasing wants and they too roam now, fields of words
passable under our greasy fingertips, I am wearing this flower-print thing
from the thrift store. Tensions are lost, even for the ex-pats in bars straining
their intelligence through disaffection. Murdered intimacies we can gawp

at once we’ve paid the cinema fare. I remember the city. The gallows are
still there, roped with bloody threads of plastic, deceased shopping bags.

Me underneath their memory in the night as it kicks in, wretchedly examining
what of history cannot be read, making plans aided by electronic devices, the
concept of speech now something that is written and which only afterwards is
permitted to leave my mouth. I’ve prepared a statement: I’ve prepared several.